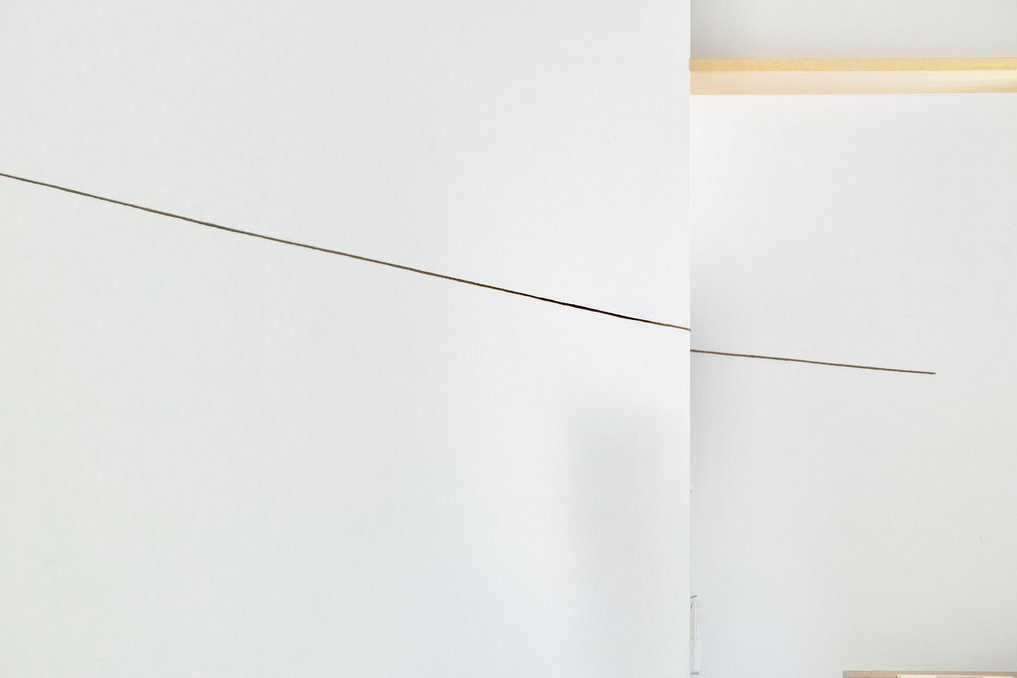 
Imagine your impression before a painting of Vincent van Gogh.
You don't own the painting as the property belongs to someone else.
Then, who owns your impression? The property owner? Of course, not.
Gogh's painting is a vehicle of formless impression, its seed, wind, and flower.
Hope my body also becomes such a vehicle, be it a seed, a wind, or a flower.
Even if unable to become all of these at once, one may try to be at least one of these.
You too are either of these, whichever you're an artist or a beholder. Let's see what I'm becoming today.
How are you?


At KOMAGOME 1-14 cas, Tokyo, TANA Gallery Bookshelf is pleased to present "Walls without Images / Forms without Colors / Drawing without Traces / Condition of Painting," a solo exhibition of Japanese painter Ryuhei Fujita, featuring his experimentations to question the nature of painting and the authentic form of art.

Focusing on painting as an act and its frameworks, not on its contents of formal styles, Fujita draws a number of lines and curves in space in such a way that anyone could have performed it alike. The field resulting from his extensive drawing becomes a multi-layered environment which simultaneously is his own production, a frame for someone else to imagine his or her own vision out there just like an afterimage, and a specific demonstration of the framework enabling it. This attempt aims at letting himself as an artist-as-creator send away his work, while trying to invite the beholder to engage the work more deeply along with the recession of the creator; and movements of his drawing become circuits for these two standpoints to relocate the concept of painting from a specific work to each experience, and from an artist to all people.

Behind his attempt is a contradiction between the essential freedom of "painting" and its historical difficulty. For human beings, the act of "painting" is so fundamental that it has since Lascaux cave paintings taken place all around the world, similarly or variously, freely without any reason to support it. In contract, the modern history of painting has developed mainly in the West, now so matured as to declare the end of painting at an end of continuous updates on its thematic contents and formalistic styles. At an increasingly narrower vanguard of the progressivist history, painting has lost its potency as an avant-garde while witnessing the withering legitimacy of theories that had once grounded reasons to paint in each art-historical paradigm. Still, the history has overshadowed contemporary art, where the act of painting faces a deep-rooted loss of motivations, in spite of its fundamental freedom. Starting as a painter, Fujita also faced the difficulty and refrained himself from painting at all for years, in pursuit of frameworks for him to start painting without deceiving himself.

At some point, Fujita discovered the earth as a framework. Without any fixed viewpoints or boundaries, the surface blurred autonomy of the work of art, which allowed him to draw as an ambiguous agent that simultaneously behaves an artist and a beholder. Tilting his vertical sight to the horizontal, inserting his body into a base-materialistic reality of the friction of painting materials and the ground, roaming in space guided by pulse-like drawing in certain patterns, and accumulating its repetition and difference to the site, Fujita's earliest production attained authentic freedom of painting by consciously approaching to a primitive act like graffiti by kids. Yet, not sticking back to the primitive drive, Fujita's inspiration has extended toward diverse frameworks experiences with a variety of materials and spatial conditions. The simple dynamism of his anonymous drawing that can sneak inside the bodily feeling of someone has come to take other forms like a ribbon floating in the air, even released off from his own hand, and the liberating horizontality of the earth has been translated into more-dimensional and many-sided continuous planes that connect separate spaces flexibly.

Further pursuing his practices toward what can be called the painting of formlessness and anonymity, Fujita's third solo exhibition offers a site to present walls without images, forms without colors, and drawing without traces, as possible conditions to frame an essential nature of the art of painting. It also attempts at fabricating various conditions tested through the history of painting, such as materials, spatialities, compositions or institutional elements, now detached from their once-fixed sets as certain theories, into a framework to enable the fundamental energy of art to come into being. What is painting? What is art? What is the exhibition space? And, for whom do they exist? Please enjoy the exhibition as a site for those questions, as well as a demonstartion of an artist's answers.